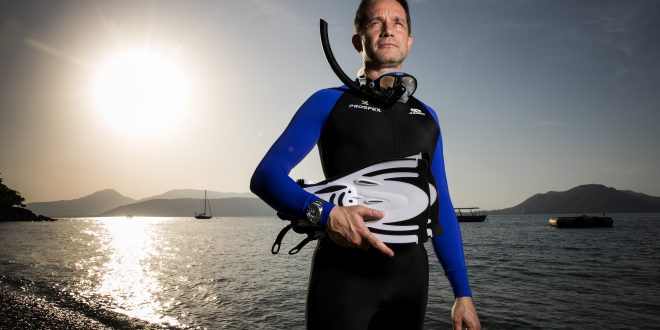 Now is the time to Save the Reef - Fabien Cousteau comes to Fitzroy Island for Seiko. Pictures Chris Pavlich

The Japanese watchmaker has brought ocean conservationist and documentary filmmaker, Fabien Cousteau, to Cairns as both brand ambassador for Seiko’s Prospex dive watch and supporter of the world’s oceans. Fabien Cousteau is the first grandson of Jacques Cousteau, the legendary filmmaker and scientist, who pioneered marine conservation and received the UN International Environment prize in 1977. Amongst many achievements of his own, the younger Cousteau spent 31 days underwater from 1 June to 2 July in 2014, filming and collecting scientific data as a tribute to his grandfather. In doing so, he set the record for longest time underwater for a film crew, surpassing his grandfather’s 30 days set in 1963. In 2016, he founded the Fabien Cousteau Ocean Learning Center to help create positive change for the world.

Seiko donates a portion of all sales from its Prospex ‘Save the Ocean’ collection to Cousteau’s Ocean Learning Center.

“I am incredibly proud to carry on in the family legacy and to support the work that Seiko is doing to preserve the wildlife that depends on a healthy ocean environment” Fabien Cousteau says.

“Fabien challenges us all to look afresh at the marine world,” Mr Suganuma stated, “and Seiko is proud to support his mission to expand the world’s knowledge of the importance of the health of the seas.”

“Throughout history, the people who changed the world have been those who think outside the box and take action,” Mr Suganuma continued. “Fabien’s undertaking aligns with our own quest as one of the world’s few fully integrated watch manufacturers, as well as our determination to help to restore the health of the planet for future generations.”