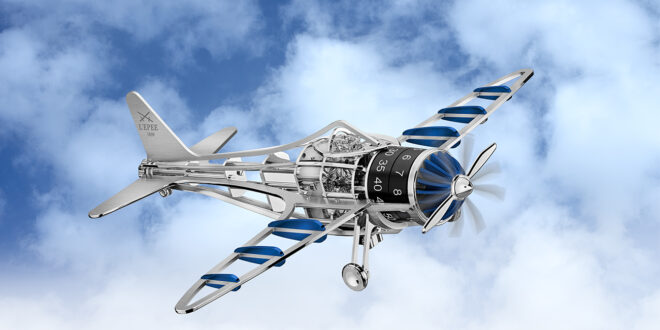 With TIME FLIES L’Epée 1839 allows our imaginations to soar through the skies. TIME FLIES follows the interstellar adventures of STARFLEET MACHINE and The 5th Element, exploring the solar system with Destination Moon, and excursions through the lower atmosphere with The Hot Air Balloon.

TIME FLIES pays tribute to the conquest of the skies and one of the most brilliant inventions ever made: the airplane. Aviation made its mark on the last century, motivating adventurers to go ever higher and ever further, and it changed traveling forever. The plane captured the collective imagination, and there have been many stories of heroic aircraft journeys. Who never had a childhood dream of adventure as a pilot.

Some things fire up imagination and fantasy more than others. Some adventures only the elite, can enjoy, but the boundless expanse of the imaginary world is accessible to everyone. TIME FLIES is an 8-day clock in the form of a stylized 1930s plane, offering just enough structure to provide form, and just enough empty space to inspire our imaginations.

TIME FLIES is a partnership between l’ECAL and L’Epée 1839, embodying the adventurer’s airplane of our childhood dreams, its minimalist form evocative rather than definitive.

Hours and minutes are displayed on large diameter stainless steel disks with black PVD coating on a circular-brushed satin finish and stamped numerals. A quick glance is enough to read the time thanks to the excellent legibility of its display, but the spectacular, skeletonized movement is worthy of deeper contemplation. The movement, built specifically for this TIME FLIES, allows the escapement, which regulates precision, to be displayed in the cockpit. Accuracy is in the pilot’s seat!
The architecture of the 8-day movement, developed in-house by L’Epée 1839, follows the form of a real airplane. As in a plane, power comes from the front where the engine is located, and is generated by a fully openworked crown reminiscent of engine cooling radiators just behind the propeller. When fully would TIME FLIES can soar for a full eight days before “refueling.”
An airplane’s control and instrumentation systems are located within the cockpit; and the same is true for TIME FLIES, which has a horizontal precision regulator in its cockpit, just above the wings. The constantly oscillating balance-wheel of the regulator draws the eye, and is protected from both cosmic radiation and curious fingers by a series of small panels forming the cockpit’s cage.
In another nod to childhood toys and fantasies, the propeller spins freely at a simple push of the finger. Despite of its airy skeleton, TIME FLIES weighs a substantial three kilograms, its three-wheel landing train providing excellent stability.
For a truly sensational display, L’Epée 1839 has developed a mounting stand on which TIME FLIES can be admired taking-off. An innovative latch beneath the movement clips it securely in place. On its stand TIME FLIES is as elegant placed on your desk as on its pedestal in a library.

History, design and inspiration
L’Epée 1839 takes off once again in the conquest of the air, accomplishing one of humankind’s wildest dreams. For centuries, man has dreamed of being able to take to the air and fly like a bird. From Leonard de Vinci’s day to ours, geniuses and aeronauts developed aviation, pushing back its limits again and again, repeatedly challenging the laws of physics and daring to achieve the impossible.
Aviation was the theater of many exploits. In 1909, after 32 attempts, pilot Louis Blériot made the first crossing of the English Channel (40 kilometers  between Calais and Dover). This feat of perseverance had a global impact, and pilots like Blériot, these “magnificent men in their flying machines,” caught the world’s imagination. Louis Blériot, always the pioneer, invested all his savings in his own aircraft factory. During the same period, Louis Charles Bréguet, a descendant of the watchmaker and physicist Abraham Louis Breguet, was another of the first aircraft manufacturers.

Breguet and Blériot are the founding fathers of commercial aviation. Blériot was the first to design aircraft for serial production, which notably saw service in the famous company Aéropostale.
Flying great distances in all weather conditions presented formidable challenges for these early aviators. Postal aviation would never have existed without the courage of its first pilots, true heroes who inspired future generations. Every flight was a high-risk adventure, embarked upon with no instruments or aids but the eyes and tenacity of its pilots.
These extraordinary pilots were models of courage and determination, traveling endlessly, living a life of adventure between earth and sky, triumphing over oceans, African deserts, and mountain chains. The Aéropostale adventure was fascinating and impressive — and because it was brimming with mechanical marvels and technological triumphs, it demanded audacity and sacrifice of its pilots.

L’Epée 1839 and aviation, a long story
Aeronautical research was in constant development in a quest for new exploits and records. As early as 1921, Louis Charles Breguet believed it was possible to reach the speed of sound. In 1964, research began on designing the first supersonic airplane capable of transporting passengers. 1977 heralded the introduction of Concorde’s Paris-New York scheduled passenger service.
TIME FLIES is a return to its origins for L’Epée, which, in providing the clock for the Concord, is the only horological manufacture to have equipped a commercial supersonic aircraft.

Aviation and horological functions
Aviation and horology have been closely linked throughout their history. The earliest aviators used their watches as their sole navigational instrument to calculate their position and set their course.

The TIME FLIES squadron currently includes four versions, each one in a limited edition of 99 pieces.

Materials: Palladium or gold-finish brass and stainless steel, or an aged and stabilized bronze color.

Juliette Lefèvre, designer x ECAL
Born in France, Juliette Lefèvre is a passionate and eclectic designer drawing inspiration for her creations from travel and discovery. After obtaining her science Baccalauréat, Juliette Lefèvre retained her love of the sciences and the magic of mathematics, revealing her Cartesian side in her artistic projects. Her artistic research led her to Penninghen and the Ecole Supérieure des Arts Graphiques in Paris (formerly the Académie Julian, where the Nabis movement emerged 1888, including such great names as Jean Dubuffet, Marcel Duchamp, Jacques Villon, Édouard Vuillardet, and Henri Matisse). She spent five years completing a Master’s degree in artistic direction. Juliette Lefèvre career encompassed the creative studio of Chanel, bringing color, travel, and artistic direction input to the pop-up stores in Tokyo, Singapore, and Madrid. She then resumed her studies, completing a Master of Advanced Studies in Design for Luxury and Craftsmanship at the ECAL (Ecole cantonale d’art de Lausanne). This proved to be a valuable year of new contacts, new subjects, and the discovery of a new artistic avenue. The collaboration with l’Epée 1839 was her first design project, which proved to be a project full of complexity and a highly stimulating challenge. Today, Juliette Lefèvre continues to apply her talent to the world of luxury and the artistic crafts to exalt expertise.

ECAL/Ecole cantonale d’art de Lausanne
Internationally renowned in the fields of design, photography, graphic design, film, new technologies and art, ECAL constantly features in the top five art and design schools. Directed by Alexis Georgacopoulos since 2011, ECAL has flourished in the creative industry thanks notably to its competitions, which involve globally renowned qualified practitioners, artists and designers, and its numerous collaborative projects and commissions from companies or cultural institutions. These allow its students to acquire sound expertise and enjoy stimulating practical experiences.

The Master of Advanced Studies in Design for Luxury & Craftsmanship
This one-of-a-kind program is aimed at students who already have a bachelor’s or master’s degree and want to perfect their design skills or enter fields of excellence as varied as fine watchmaking, tableware, fashion, gastronomy, artistic crafts or the use of noble materials through specific techniques. Every year since 2012, this program has enabled around fifteen students from around the world to work on collaborative projects with prestigious companies benefiting from centuries of heritage, and allowed them to take part in workshops presented by major figures on the international design scene.

L’EPEE 1839—Switzerland’s leading clock manufacture
L’Epée has been a prominent clockmaking firm for more than 180 years. Today, it is the only manufacture in Switzerland to specialize in the production of high-end clocks. Founded in 1839 by Auguste L’Epée in France’s Besançon region, the company originally focused on producing music boxes and watch components. Even at this early stage, the brand was synonymous with entirely hand-made pieces.
Starting in 1850, the manufacture became a leader in producing escapements and began to develop special regulators for alarm clocks, table clocks and musical watches. It gained wide recognition and filed numerous patents for special escapements, particularly for use in its anti-knocking, auto-starting and constant force systems. L’Epée became the principal supplier of several famous clockmakers and went on to win many gold medals at World Fairs.
During the 20th century, the firm owed its success largely to its remarkable travel clocks. Many associate the L’Epée brand with influential individuals and people in positions of power. Members of the French government often gave clocks to their distinguished guests. When the Concorde supersonic airplane began its commercial flights in 1976, L’Epée fitted the cabins with wall clocks to give passengers the time. In 1994, the brand demonstrated its penchant for challenges by constructing the largest pendulum clock in the world, the “Giant Regulator”, which features in the Guinness Book of Records.

L’Epée 1839 is currently based in Delémont in the Swiss Jura Mountains. With CEO Arnaud Nicolas at the helm, it has developed an exceptional collection of table clocks that includes an entire range of sophisticated clocks.