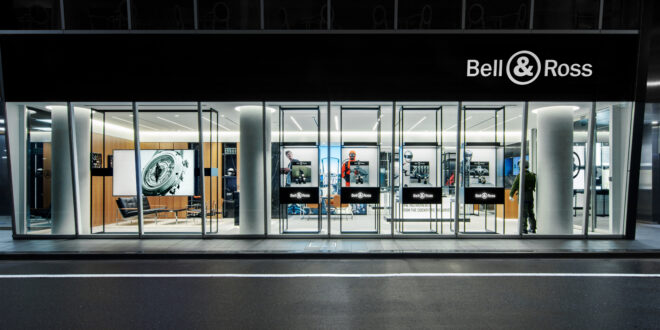 The brand was founded in 1992, and operates mainly in the CHF 2,000 to 10,000 segment. It breathed new life into French watchmaking at a time when its last remaining pillars were crumbling. The company likes to swim against the tide. It started out doing vintage in the 1990s, when watchmaking was trying to throw off the shackles of the past… and today it’s betting on futuristic disruption, notably via new materials, when the rest of the industry seems to have been teleported back to the 1960s!

Bell & Ross is a duality. Not just the name, which is linked to its founding duo, childhood friends Bruno Belamich (the designer) and Carlos Rosillo (the developer). Virtually everything about this Franco-Swiss brand seems to come in twos.

Chanel holds a minority stake in Bell & Ross and brings a wealth of expertise. For example, they are very strong in the legal field. Chanel’s approach is “collaboration without obligation”.

Roventa-Henex manufactures all watches for Bell & Ross, from the first sketch to distribution and warehousing. Due to the discretion of Roventa-Henex, this is never confirmed or denied.

The opening of this new boutique in Ginza, the heart of one of the most dynamic capital cities in the world, only goes to highlight the importance that Bell & Ross places on international expansion, with the brand currently expanding in more than sixty countries.

Functionality in substance – timeless style in form. The surface reconnects with the brand’s guiding principle. At a glance, the façade of the boutique asserts the brand’s philosophy and its corporate visual identity. The reference that inspired the design of this store: that of the world of aviation.

Each of the four outdoor showcases is associated with each of the brand’s four themes: aviation, diver, F1 and urban.

Driven by the brand’s Manifesto where the essential is never compromised by the superfluous, the interior décor displays an uncluttered and modern design to offer a sense of transparency. The space is filled with mineral textures and gives pride of place to furniture designers. This decorative leaning reconnects with the world embodied by Bell & Ross – that of functionality, excellence and timelessness.

Inside the boutique, all the models of the collection will be displayed. Indeed, it is one of the few places in the world where you can find the whole collection.

Since its beginning, Bell & Ross has forged a strong bond with the Land of the Rising Sun. The establishment of the brand is nothing new to this country, where it has been present for nearly 25 years.

In 2019, decades later, Bell & Ross set up branches in Japan, and coincides with the release of its new icon, BR 05. A strategic step in the brand’s history. Two years later, in 2021, the brand is ready to explore its 1st official flagship store in the heart of Tokyo, Ginza in Japan.