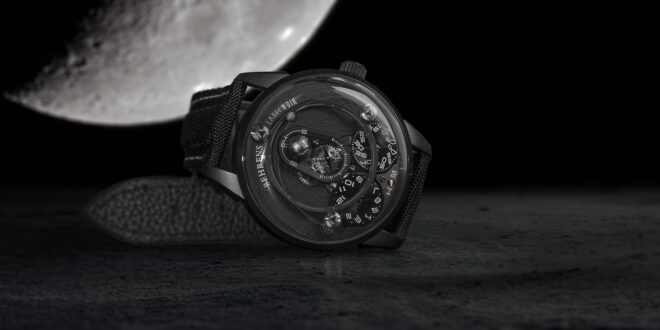 Embracing codes to transcend them. If there was a common credo between the independent watchmaker Behrens and the customisation expert Label Noir, it would be this one. Two brands passionate about digressions, where creativity is king and character queen. Resulting of this exclusive collaboration, the Apolar Dark Moon takes the moon phase-out of its usual orbit, into a more obscure, eventful, and resolutely surprising territory. An unseen trajectory for a new time reading.

It is precisely with this ambition that Behrens the Hong-Konger has been freeing herself from convention for the past ten years and became renowned among the greatest. Its singularity: modifying its own movements by building internal mechanical modules offering a display both functional and diverse. Nominated at the GPHG 2020, the Apolar watch illustrates this constant innovation quest combined with the art of being different. Mechanical model developed entirely “in-house”, Apolar draws its inspiration from the orbital relationship between Earth and Moon. A celestial emanation with a unique design which could only enchant Label Noir to put its stamp on, rewrite its destiny. Fifth collaboration with a watch brand, the Apolar Dark Moon marks a new chapter in Label Noir’s co-branding history. A system allowing the Geneva watchmaker to sublimate inventive genius, magnify the material, and put its experience hallmark. Creative and offbeat luxury, unusual and metamorphosed timepieces.

The Apolar series distinguishes itself by a resolutely atypical design. At the top, the mechanical Earth and Moon are revealed in a spherical design, guaranteeing a visual effect both three-dimensional and functional. At 12:00 on the dial, the globe dressed in black and grey rotates every 24 hours. A daily indicator adorned with a discreet red index through which the day/night function unfolds. And by a circumvolution effect, the Moon, small spherical globe attached to a large “inclined” rotating ring, moves around the Earth in a 28-day cycle. While seconds are housed at the heart’s dial by a two-pointer hand, hours and minutes radiate from two decentralised metal discs respectively located at 7 and 5 o’clock. A milestone in the watch design world, with an aesthetic entirely modified by the customisation workshop. Case, plate, discs, display, coating, bracelet, nothing has escaped to Emmanuel Curti’s, watchmaker and founder of the Geneva-based company who became a master in the art of sophisticated coatings. On the plate, seas, cirques, craters, and moon rocks come to life through the exclusive MMC process. Laser made, it creates a unique relief texture, which reproduces the lunar surface from NASA images. While the Apolar Dark Moon plays the textured monochrome card; stars, rays, and typographies, also redesigned, sparkle with blue Luminova in the night mystery.

The stainless-steel satin-finish polished 42mm case gives way to a polished matt titanium case middle, which also benefits from a specific Label Noir signature treatment, the DLC coating. An intense, sensual, and mysterious hue, an allegory of the contrast between the stars; in the same way Earth and the Moon repel each other to better attract.

But as far as the mechanism is concerned, this timepiece, limited to 50 pieces showcased on a black fabric strap with white stitching, displays all the initial characteristics of the Apolar B020. A Swiss-made ETA Cal.2824 automatic movement, a 42-hour power reserve, a frequency of 28,800 vibrations per hour, and water resistance to 50 metres. And since the brand has set out to develop an unprecedented demonstration of celestial movements, the Apolar model offers a skyline on its own. A domed sapphire crystal, Earth’s curvature, offers a new perspective for watch enthusiasts attracted by beautiful and rare. But before feeling the attraction law and falling for the Apolar Dark Moon, there is every reason to marvel at the box creative ingenuity. A space capsule top, black, massive, eloquent; and finally, from its bezel: to dive between sky and earth.

The Apolar Automatic Limited Edition Label Noir, CHF 4’900, is available online on the Label Noir website, on the Behrens website, as well as retailers.

Taking the moon phase out of its usual orbit to a more obscure and resolutely surprising territory. This is what Label Noir achieved with the Apolar Dark Moon, the result of its collaboration with the watch brand Behrens. Noticed at the GPHG 2020, Apolar is inspired by the orbital relationship between Earth and Moon and invents a new trajectory for a new time reading. While the mechanism remains identical to the original, the Geneva-based customisation specialist has put his stamp on the aesthetics. The terrestrial globe is adorned with grey and black, and on the plate the moon rocks come to life thanks to the exclusive MMC process. The polished matt titanium case benefits from the specific Label Noir treatment, the DLC coating. And at the time the Apolar Dark Moon plays the textured monochrome card, stars, rays, and redesigned typographies sparkle with blue Luminova. Rendez-vous in the night mystery.