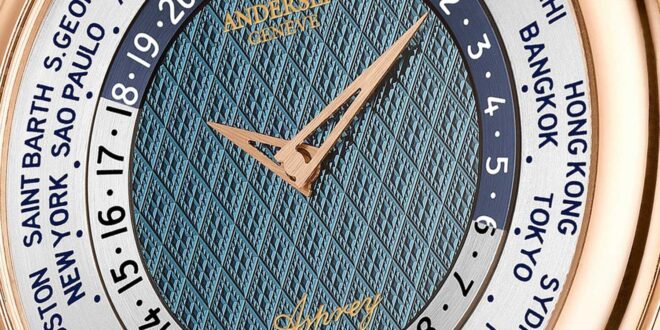 ANDERSEN Genève, the independent watchmaker known for its dedication to artisanal watchmaking and bespoke Haute Horlogerie, has partnered with Asprey, one of the most revered and historic names in luxury, to create a truly exceptional wristwatch that celebrates the joy of travel.

The ANDERSEN Genève x ASPREY “Heures du Monde” is a beautiful evocation of the glamour and style of a bygone era. Its elegant design and detailed craftsmanship hark back to watchmaking’s mid-20th century Golden Age, a period when burgeoning intercontinental travel made worldtime wristwatches, that show the time in all 24 time zones at once, true prestige items.

A true collector’s item limited to just 24 pieces, the “Heures du Monde” is a romantic fusion of ANDERSEN Genève’s unique design and technical DNA with the storied heritage of the House of Asprey. Founded in London in 1781, Asprey has counted generations of royalty, world leaders and global tastemakers among its clientele, and continues to be pioneering in its work with independent artisans.

The world in a watch

For ANDERSEN Genève, founded by renowned watchmaker Svend Andersen in 1980, the Worldtimer has been a cornerstone of its craft for more than 30 years. Svend Andersen developed his expertise in worldtime watches while working in the Grand Complications Workshop of Patek Philippe in the 1970s, and in 1990, a decade after founding his eponymous Atelier, he produced his debut worltimer, the Communication 24 – a stunning watch inspired by Louis Cottier, inventor of the complication in the 1930s. Subsequent examples like the Christopher Columbus, the Mundus and the recent Tempus Terrae editions are today sought out by collectors around the world.

The ANDERSEN Genève x ASPREY “Heures du Monde” is full of details and inspirations that connoisseurs of both brands will recognise. A restrained 39mm worldtimer with a curvaceous, three-part case in 5N red gold, it features distinctive, angular lugs seen previously in important ANDERSEN Genève timepieces like the Secular Perpetual Calendar (1996) and the Orbita Lunae (2002).

The dial, in 21 carat BlueGold, is decorated with a complex guilloché engraving inspired by an historic Asprey engine turning pattern. To achieve BlueGold, the precious metal is mixed with iron elements and heat-treated to turn it a radiant shade of blue – a technique that, in watches, ANDERSEN Genève alone has mastered, and which results in a unique tonality for each dial. Asprey’s intricate diamond-shaped pattern, a brand signature never before seen on a watch dial, is then engraved into this surface by a process of traditional hand guilloché, by the finest Swiss Artisans.

Watch experts will also know that the iconic Asprey scrolled logo, which appears on the bottom half of the dial, is itself a feature of some of the world’s most important mid-Century watches. Asprey was responsible for introducing Patek Philippe to the United Kingdom, and its logo also adorned dials from the 1950s and 1960s by makers such as Jaeger-leCoultre and Rolex, which in time have become coveted by collectors around the world. Most famously, the logo is found on the Patek Philippe reference 2499 in yellow gold, which set a world record for the reference when it was auctioned in 2018 for CHF 3.9 millon (£3,370,000).

The caseback is again a restrained affair with a highly decorated automatic movement boasting Côtes de Genève and perlage decorative finishes. The movement has been painstakingly finished by hand with special polishing of the wheels, ratchet teeth and mirror polished screws. The rotor itself is a piece of art, again in BlueGold with a hand guilloché  decoration in the historic “engine turning” Asprey pattern.

Every component of the watch is manufactured in Switzerland, whether in the ANDERSEN Genève Atelier on the banks of the Rhône, or by Artisan specialists in Geneva or La Chaux-de-Fonds. As ever, ANDERSEN Genève works in partnership with the most passionate and skilled craftspeople, with no compromise on quality.

Asprey, recognized as one of the world’s pre-eminent luxury goods brands, has over two centuries of craftsmanship expertise and artisanal aptitude, served a substantial client base of members of royalty, heads of state and important actors on the world stage. Quality, craftsmanship and intemporal design are at the core of each product created across a wide assortment of jewellery, leather, and home collections including an unrivalled bespoke service with the famed motto, ‘It can be done’.

Asprey’s relationship with timepieces dates back to the 19th century when Asprey sold watches and clocks manufactured in the UK that were considered leading items of luxury and sought around the world, subsequently becoming a leading purveyor of luxury watch brands in the 20th century and even introducing Patek Philippe to the United Kingdom.

The now iconic scrolled Asprey logo adorned dials from the 1950s and 1960s by makers such as Jaeger LeCoultre and Rolex, which in time have become coveted by collectors around the world.

The yellow gold Patek Philippe 2499 signed by Asprey, the only known example, set a world record in 2018 for the reference when it was auctioned for CHF 3.9 million (£3,370,000). So important is the timepiece that it’s often referred to simply as “The Asprey”;  its distinct luminous hands also setting it apart from other reference 2499s.

The hands can also be found in other Asprey signed Patek Philippe watches, such as the magnificent reference 565.

That lineage of excellence and collaboration continues today, in line with Asprey’s core values, championing innovation, craftsmanship and rarity, with a series of watches with the next wave of leading independent watchmakers.

Since 1980, ANDERSEN Genève has been creating high-end timepieces for collectors around the world. Its work combines incredible ingenuity with beautiful craftsmanship, much of it produced on a bespoke basis for clients wanting something personalised or completely unique.

Svend Andersen first achieved fame in the watch world in 1969 with his outstanding “Bottle Clock” invention – a horological take on the “ship in a bottle” concept. He went on to develop his craft in the Grand Complications Atelier at Patek Philippe, where he worked for nine years. In 1980, he began taking private commissions from discerning collectors, soon opening his own workshop in Geneva – ANDERSEN Genève was born.

Ever since, ANDERSEN Genève has been developing watches of significant complexity and beauty. Besides its magnificent Worldtimer editions, it is known for its complex horological automata, which animate discrete, beautifully-realised scenes; and the ingenious “Montre A Tact” watches that replace a dial and hands with a pair of time reading windows in the top and side of the watch, meaning the owner need not turn his wrist to read the time. Another famous achievement is the “Secular Perpetual Calendar”, which solves a quirk of the Gregorian Calendar that requires normal perpetual calendars to be manually corrected in centennial years; the ANDERSEN Genève complication requires no adjustment up to and beyond 2400.

Svend Andersen is also the founder of the Academie Horlogere des Createurs Independents (AHCI), a body inaugurated in 1985, bringing together many of the world’s most esteemed independent watchmakers, to represent them and collectively promote their work.

With a small team working in the heart of Geneva, only a few dozen timepieces leave the Atelier every year – in fact, fewer than 1,500 timepieces have been manufactured since 1980. In all that time, the Atelier has remained at the same location next to the Rhône river.

Truly the watchmaker’s watchmaker, Svend Andersen and ANDERSEN Genève have been a driving force at the heart of independent watchmaking for four decades. Its aim remains the same: to support a deep passion that’s shared between its watchmakers and knowledgeable collectors alike.

Asprey is a British retailer of jewellery, leather, silver, and other luxury goods. Founded in 1781, the House has historically been recognized as one of the world’s pre-eminent luxury goods brands and has a substantial client base of members of royalty, heads of state and important actors on the world stage.

For over 240 years, Asprey has been leading in the re-interpretation of luxury for generation after generation, with a unique product assortment including jewellery, leather goods, accessories, silver, watches, clocks, china, crystal, games, silk and accessories. At present, Asprey holds a Royal Warrant from HRH Prince of Wales for jewellery and silver.

The company’s flagship store is based in Mayfair’s Bruton Street, the original home of its London workshops. Asprey’s designs and services can be accessed from their boutiques worldwide, from London to St. Moritz and New York to Tokyo.