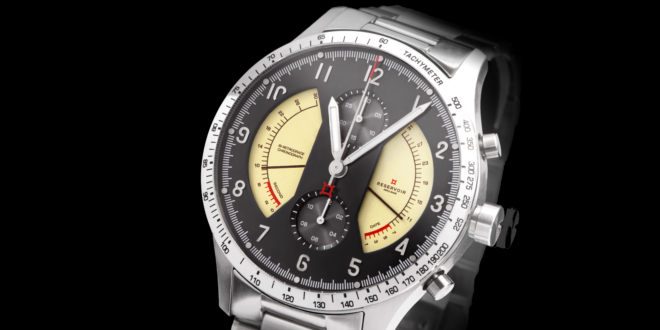 The new RESERVOIR collection takes its inspiration from measuring instruments widely used in the world of sound or Hi-Fi. The two retrograde hands of the new RESERVOIR Sonomaster Chronograph faithfully reproduce the hands of power measurements or VU meters from analog stereo amplifiers. This strong milestone for RESERVOIR celebrates the human quest to create pure sound, a musical exploration full of audacity and intensity.

This bi-retrograde (date and seconds at 120°) watch inaugurates a new RESERVOIR Sonomaster chronograph model, sportier than the range’s precursor model, with a case and a bracelet made entirely of brushed 316L steel (central seconds, 30-minute counter at 12 o’clock, 12-hour counter at 6 o’clock). 316L steel is known as the most resistant and durable type of steel over time. Its chemical properties give it a shiny appearance and bring a certain brilliance to the RESERVOIR Sonomaster. This stainless steel watch is powered by the new RSV-Bi120 watchmaking caliber : a bi-retrograde manufacture chronograph movement with automatic mechanical winding, and column wheel (base LJP-L1C0).

Retrograde hands – RESERVOIR’s preferred and distinctive means of display offers a plethora of practical advantages, along with that frisson of visual delight as it flies back to zero after completing its arc. It is the most “analogue” of techniques, almost a poster child for traditionalists who prefer such meters to digital read-outs. And “analogue vs digital” is a battle that has raged concurrently in at least three industries (Automobile, Watchmaking & Music industries).

Like speed, engine revolutions and time, sound levels are best measured and presented by a slim needle against a scale. The recording and broadcast industries had been using mechanical meters which were not as “fast” as sound itself, so the peaks – the maximum levels at which the sound remains undistorted and which shouldn’t be exceeded – were not captured accurately in real time. Seasoned engineers knew how to read the meters, aided by their trained hearing, but there was a need for something faster, more precise, and more revealing. It would serve as an industry standard. Above all, it had to be easy to read, as quickly as the signals it was representing.

Through the combined efforts of a number of organisations in the USA, including the Institute of Radio Engineers, Bell Telephone Laboratories and broadcasters NBC and CBS, a device called a “VU” meter arrived in 1940. The letters stand for “Volume Unit”, and it was developed to measure all manner of electronic signals, including the sounds going into a mixing desk or tape deck in a recording studio, the strength of a radio broadcast signal, the power output of an amplifier or the sound pressure levels in the listening space (also referred to as “volume” or “loudness”).

VU meters have appeared in countless forms, but all share the basic elements of a slim needle pivoting against a scale drawn in an arc or a straight line. VU meters using the latter are reminiscent of horizontal speedometers found in American cars of the 1950s and 1960s. The action of a VU meter’s needle is the same as a retrograde hand in a watch: the needles do not ascribe a 360 circle, as do conventional watch hands, but swing back-and-forth.

For RESERVOIR, which has specialised in retrograde hands, the desire to imprint the company’s signature technique on the crowded dial of a chronograph presented a dilemma. How do you accommodate all of the sub-dials of a conventional chronograph without reverting to the usual cluster of round counters? How much space is left after allowing for bi-compax or tri-compax layouts?

For the Sonomaster Chronograph, the designers had to incorporate – in addition to real-time hours, minutes and seconds – the central sweep seconds hand for the stopwatch function, a 30-minute counter at 12 o’clock, a 12-hour counter at 6 o’clock, and the date. A window for the latter would add clutter, while the desire for symmetry, which is missing in chronographs with sub-dials at 6, 9 and 12 o’clock and a date window at 3 o’clock, remained paramount.

They started with a 43mm, 316L stainless steel case with brushed finish, crown inspired by amplifier control button, push buttons inspired by bass and treeble buttons. The hands are treated with Superluminova. The opened case-back reveals the automatic movement with column wheel, and a generous 60-hour power reserve. Up to this point, the defining element – a retrograde feature – was still to emerge. RESERVOIR has carefully cultivated a unique, family look for its retrograde models. All employ retrograde minute hands completing an arc from what would be, on a convention al dial, 8 o’clock to 4 o’clock. The visual balance is assured by the hour appearing in a window above the 6 o’clock position, while below it is a retrograde power reserve. Despite the need to deal with more functions, the Sonomaster Chronograph could not depart from the established RESERVOIR design language.

With the hours and minutes of the Sonomaster Chronograph addressed by conventional hands, and with the 30-minute and 12-hour counters using traditional sub-dials, it was noted that there was ample “real estate” on either side of the divide. Two half-moon-shaped areas were free to accept the date and real-time seconds, creating what RESERVOIR has called a “Bi-Retrograde” display. For maximum readability and to create a fresh aesthetic in a horological context, RESERVOIR looked beyond the confines of the watch and automotive industries, the latter a much-favoured source of inspiration in horological circles.

Instead, they found the solution on the front panel of the iconic vintage hi-fi amplifier, such as the legendary Luxman M10 Mk II power amplifier, a much-coveted example of high-end audio equipment. This amplifier features two massive VU meters, with black needles against cream dials, accented with red segments to indicate the “danger zones”. Thinking laterally, RESERVOIR turned the dials on their sides, to be read vertically. The dial on the left provided retrograde seconds, its scale marked 0-30, with the needle – or hand in this case – flying back every half-minute. The dial on the right was chosen for the date display, its indications marked 0-31, with a retrograde fly-back return at the end of the month.

Both counters feature red segments to respect their muse, though there is no danger present. The same background colour scheme employed by Luxman was retained as well for the Sonomaster Chronograph, the cream providing vivid contrast against the fine black scale. Both retrograde counters are sunken into the main dial, the added depth this creates further recalling the physical presence of VU meters set within an amplifier’s front panel.

Rare are the occasions when two such disparate industries as watchmaking and audio equipment merge. Acknowledging this marriage, too, is the name of the watch, Sonomaster’s root referencing sound. And as RESERVOIR suspects, this watch is gonna make some noise.

AVAILABLE NOW to order online and through a prestigious network of 70+ high-end stores and specialist retailers in 20+ countries.