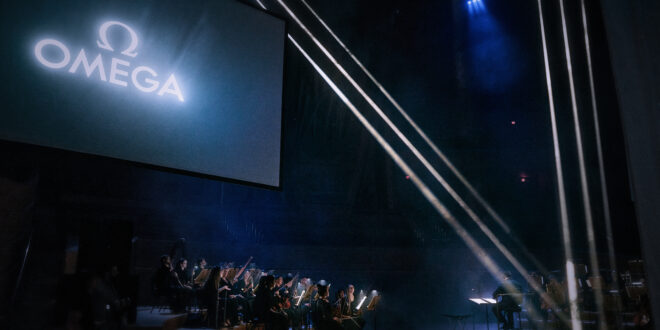 Developed in secret, the Co-Axial Master Chronometer Calibre 1932 is the first movement in the world to fuse chronograph and minute repeater functions, requiring its own mechanical “brain” to chime elapsed time.

To mark the successful completion of this six-year long project, legendary Olympian Michael Phelps joined OMEGA in Los Angeles at the launch of the brand’s most complicated calibre and two watches worthy of its power.

This cutting-edge calibre is the driving force behind two very special timepieces:

To stage a reveal, befitting timepieces which sound as good as they look, OMEGA chose Walt Disney Hall, a venue famous for its exceptional acoustic properties.

For special guest Michael Phelps, the new Chrono Chime watches embody the best qualities of the brand he is so proud to represent. “OMEGA precision has played a vital role in my own success, so I’m thrilled to help launch these incredible pieces of technology. I’ve been with OMEGA a long time, so I know what the watchmakers are capable of, but these Chrono Chime timepieces are on a whole new level.”

President and CEO Mr. Raynald Aeschlimann attributes OMEGA’s latest achievements to the brand’s enduring pioneering spirit. “The key dates of our history are more than just memorable moments in the past. We weave these milestones into what we create today. Our Chrono Chime technology is completely new, but this willingness to defy expectations, to break new ground, has always been at the heart of OMEGA. We don’t shy away from challenges; we take them on, with determination and passion.”

After the official launch of OMEGA’s ringing tributes, guests enjoyed a special Chrono Chime dinner at the LA Memorial Coliseum: venue of the Los Angeles 1932 Olympic Games. The evening included drone aerobatics and a symbolic lighting of the Olympic flame.